How Do We Nurture Loonshots? with Safi Bahcall 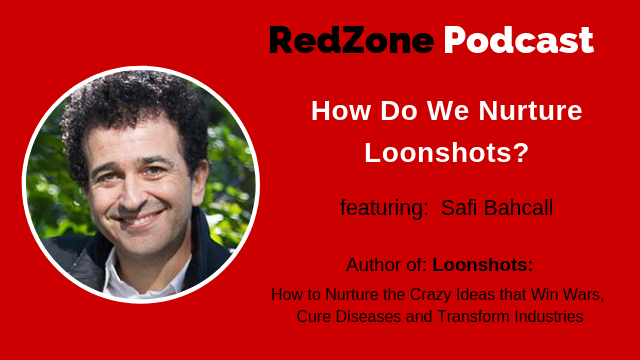 I am super excited to bring to you my conversation with Safi Bahcall. I haven’t been this excited in a long time because Safi has just written this book called Loonshots: How to Nurture the Crazy Ideas that Win Wars, Cure Diseases, and Transform Industries.

So, in this book, Safi explains how the past and what we learn from the past, has equal implications in the future. So we get into, what are the most common conversations he gets into with CEOs these days. CEOs and senior leaders that have read his book, they are calling him daily and they are asking: “How do we nurture loonshots?”

What You Will Learn From This Interview

As I mentioned, I’m very excited about this interview and I hope you’ll enjoy my conversation with Safi Bahcall.

Safi Bahcall is a second-generation physicist (the son of two astrophysicists), a biotech entrepreneur, and the author of recently published, Loonshots: How to Nurture the Crazy Ideas that Win Wars, Cure Diseases, and Transform Industries.

In 2008, he was named E&Y New England Biotechnology Entrepreneur of the Year. In 2011, he worked with the president’s council of science advisors (PCAST) on the future of national research.

He lives with his wife and two children in Cambridge, Massachusetts. Loonshots is his first book.

Ways to connect with Safi Bahcall

This episode is sponsored by the CIO Innovation Forum, dedicated to Business Digital Leaders who want to be a part of 20% of the planet and help their businesses win with innovation and transformation.