Man is Much More than a Tool Builder | He is An Inventor of Universes, with David Smith 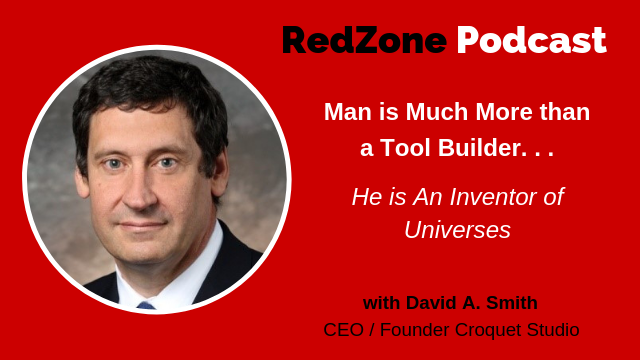 Today my conversation is with David Smith. He’s the CEO and Founder of Croquet Studios.

David is a computer scientist and entrepreneur who has focused on interactive 3D and using 3D as a basis for new user environments and entertainment for over thirty years. His specialty is system design and advanced user interfaces. He is a pioneer in 3D graphics, robotics, telepresence, artificial intelligence (AI) and augmented reality (AR). He creates world-class teams and ships impossible products.

In 1987, Smith created The Colony, the very first real time 3D adventure game/shooter and the precursor to today’s first-person shooters. The game was developed for the Apple Macintosh and won the “Best Adventure Game of the Year” award from MacWorld Magazine.

David was Chief Innovation Officer at Lockheed Martin and a Senior Fellow at Lockheed Martin MST, focused on next-generation, human centric computing, and collaboration platforms. Here, he developed several key technologies and won the Lockheed Martin TLS Inventor of the Year for the last four years (every year he has been eligible).

But that’s only the beginning….

He’s building upon the work of the pioneers in the internet: Doug Engelbart, Alan Kay, and Ivan Sutherland’s work – all focused on working with the Xerox Alto Project from a long time ago – close to 50 years ago. Some of these breakthroughs – that even amazed Steve Jobs, as you can see on some of his YouTube videos from years ago when he was stunned as he looked at the Xerox Alto project. At that time, what really stuck out for Steve Jobs was the gooey interface. This was really that first interface between a computer and a human.

So, David’s passion is to continue to use his skills, competencies, and capabilities in 3D engineering and design. His goal is to develop these applications, systems, and platforms that are really going to transform how we use computers and solve big problems in the coming years. He’s exploring the use of 3D and graphical situations that we can’t even imagine right now, using computers to solve interesting challenges and complex problems moving forward.

Major Take-Aways from This Episode:

Smith is a computer scientist and entrepreneur who has focused on interactive 3D and using 3D as a basis for new user environments and entertainment for over thirty years. His specialty is system design and advanced user interfaces. He is a pioneer in 3D graphics, robotics, telepresence, artificial intelligence and augmented reality (AR). He creates world-class teams and ships impossible products.

How to get in touch with David A. Smith

This episode is sponsored by the CIO Innovation Forum, dedicated to Business Digital Leaders who want to be a part of 20% of the planet and help their businesses win with innovation and transformation.