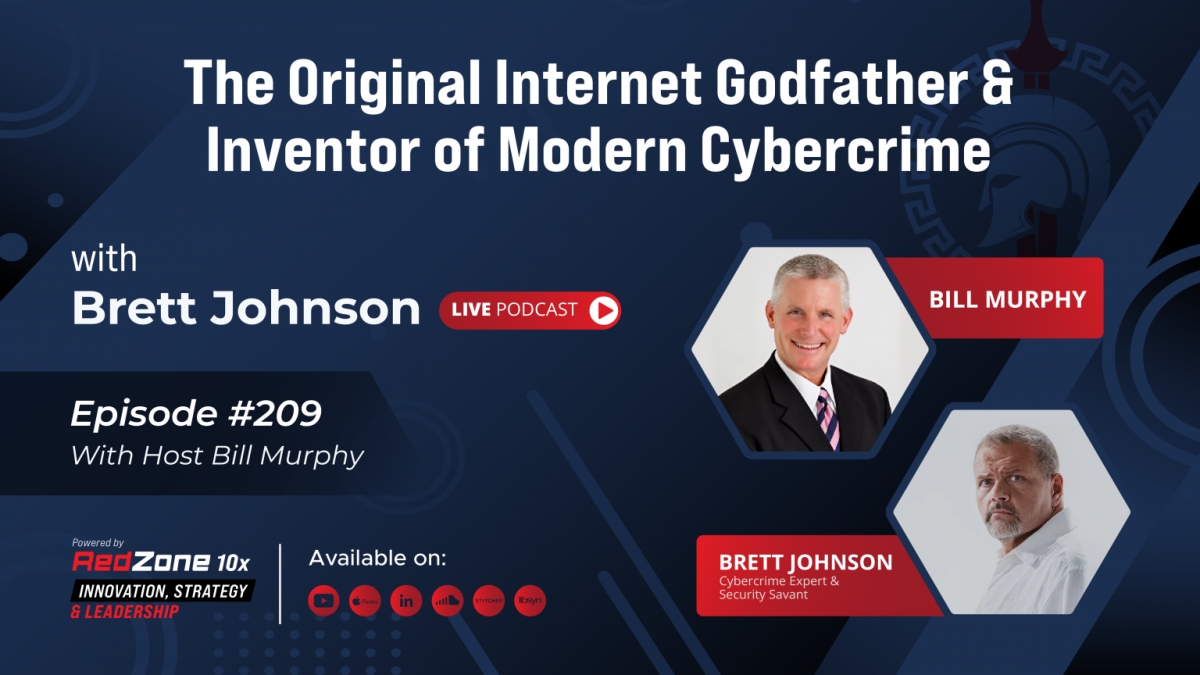 I just had this excellent interview with Brett Johnson, a keynote speaker, and consultant on cybersecurity, Cybercrime, and identity theft. His knowledge of these topics is unique because it didn’t come from any book or in any classroom. Brett’s experience is from the criminal side of things. At one point, the United States’ Most Wanted criminal, he was given the moniker of “The Original Internet Godfather” by the United States Secret Service.

Brett was responsible for defining modern financial Cybercrime as we know it today. He created the precursor to today’s Darknet markets called ShadowCrew. In the early 2000s, through ShadowCrew, He assembled a watering hole for cybercriminals to network, share information, gang up, and execute attacks on entities worldwide.

He lived a life of crime for decades. Credit card fraud, identity fraud, tax fraud, social engineering attacks- you name it; Brett Johnson did it. His criminal lifestyle eventually caught up to him as he was captured and convicted of 39 felonies, sent to prison multiple times, escaping once, before accepting responsibility and finding redemption through his loved ones and the help of the FBI.

Today, Brett works as a security consultant and public speaker. He is one of the world’s foremost authorities on Cybercrime and identity theft. Brett uses the vast amount of knowledge he has to help individuals and companies protect themselves from the type of person he used to be.

Listen as Brett and I dive deep into how cybercriminals operate, what drives them, and the most common security threats.

In my conversation with Brett today, we discuss his strategy for laying out the foundation for modern cybercriminal channels. ShadowCrew sets the standard for the way modern cybercrime channels still operate today. Brett identifies the three websites, ShadowCrew, Counterfeit Library, and CarderPlanet, known to be the main cybercriminal channels. Brett also goes into detail on the question of how easy it is to commit fraud. He tells a story of the Nigerians committing fraud by stealing a billion dollars in unemployment. Brett speaks about how to protect yourself from a scam elaborating on a personal story that involved a woman being scammed by him through eBay. Finally, Brett talks about using his first-hand knowledge of Cybercrime for good as well as speaking to his superpower that he can see that helps in engagement with customers. That is my introduction to Brett, “The Original Internet Godfather,” and I want to welcome you to our exciting conversation.

Here are some of things that you will learn in this podcast episode:

How to Connect with Brett Johnson

You can go to the show notes to get more information about this interview and what we discussed in this episode. Click Here to download the full transcript.

If you are interested in learning more about my company, RedZone Technologies, and our security expertise, in particular related to Cloud and Email Security Kill Chain Strategy, Techniques and Tactics you can email cloudkill@redzonetech.net.